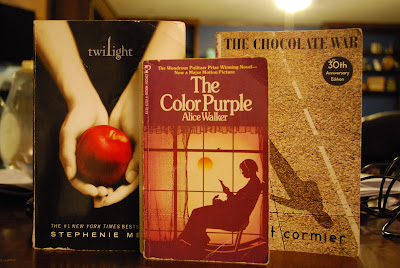 Banned: From day one that this book was published, unsurprisingly it has been challenged. It honestly and unapologetically describes controversial issues such as homosexuality, rape, and racism. Since the argument can be made that these are valid issues to consider in literature and discussion, among other things, people have protested against the book for offensive language, sexual explicitness, violence, man's relationship to God, and it's description of African (the continent) history.
Sources:
Banned Book Awareness: The Color Purple by Alice Walker
Banned and/or Challenged Books from the Radcliffe Publishing Course
The Color Purple and Its Controversy

The Color Purple is a tale of enduring love, faith, and spirit. In a series of letters the tale of two sisters separated as teenagers is told. The women lead very different lives, one as a much abused housewife and the other a missionary in Africa. Celie, the main character is the "housewife", and so much more. The novel delves into the darker depths of Africa and African-American history, more so it delves into the dark depths of the human psyche and the secrets we keep. This novel is excellent for teaching anyone that has endured hardship and wrongdoing that there is a light at the end of the tunnel.

Quote: "And not being tied to what God looks like, frees us."

Your type of tale? Try these: To Kill a Mockingbird by Harper Lee, Fried Green Tomatoes at the Whistle Stop Cafe by Fannie Flagg, and Songs in Ordinary Time by Mary McGarry Morris

Other Books for Banned Book Week 2011:
Twilight by Stephenie Meyer
Posted by Amber at 9:18 PM